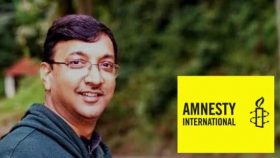 The Amnesty International has severely criticized the Indian occupation forces for unlawful killing of the child during a cordon and search operation in Islamabad district of occupied Kashmir.

Reacting sharply to the killing of a minor boy, the Amnesty said the brutal murder shows utter contempt for human life and the fundamental principles of humanity.

Avinash Kumar, Executive Director, Amnesty International India, in a statement in New Delhi said, the authorities must investigate this incident and must bring the perpetrators to justice.

The statement further said killing of civilian is in violation of Article 3 of the four Geneva Conventions of 1949.