IOK residents living without basic rights for past 11 months 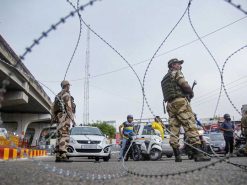 In occupied Kashmir, people are living without all basic human rights as they are facing a curfew-like situation from the past around eleven months.

According to a report released by the Research Section of Kashmir Media Service, today (Sunday), arrests, killings and rapes have become order of the day especially during the past more than 300 days of military lockdown, imposed by India after revocation of Kashmir’s special status on August 5, last year.

The report citing the findings of Amnesty International and Human Rights Watch on the crippling rights violations in Kashmir said, the youth are the main target of the fascist Modi government.

The report particularly mentioned the fresh arrest of Naseema Akhtar Sheikh, the elderly mother of a martyr, Tauseef Ahmad Sheikh, during a police raid on her house in Rampora area of Kulgam district.

It said that the Kashmiri women are the biggest victims of harassment and rape.

The report added that journalism, too, had become a crime in occupied Kashmir where reporters are harassed for reporting the truth.

Meanwhile, APHC leader, Muhammad Shafi Lone and Chairman of Panjal Civil Society Amir Muhammad Shamsi in their statements strongly condemned the introduction of controversial laws by India, aimed at changing the demography of the disputed territory.

Moreover, Indian police filed a charge-sheet against more than a dozen people including Kishtwar-based prominent freedom leader, Jahangir Saroori, for their pro-freedom activities, in a TADA court in Jammu.

Meanwhile, the Amnesty International has severely criticized the Indian occupation forces for unlawful killing of the child during a cordon and search operation in Islamabad district of occupied Kashmir.

Reacting sharply to the killing of a minor boy, the Amnesty said the brutal murder shows utter contempt for human life and the fundamental principles of humanity.

Avinash Kumar, Executive Director, Amnesty International India, in a statement in New Delhi said, the authorities must investigate this incident and must bring the perpetrators to justice.

The statement further said killing of civilian is in violation of Article 3 of the four Geneva Conventions of 1949.