Pakistan and Iran have streesed the need to resolve the issue of Jammu and Kashmir through dialogue and peaceful means based on the will of Kashmiris and in line with the resolutions of the United Nations Security Council.

The joint statement issued after the conclusion of Prime Minister Imran Khan's two day official visit to Iran said the President of Iran and the Prime Minister emphasized that the right of the people of Palestine to establish an independent and sovereign Palestinian state should be respected as key demand of Muslim states.

Both sides reiterated the importance of deepening and reinforcing bilateral ties based on principles of national interest, territorial integrity and mutual respect for national sovereignty.

They called for swift implementation of bilateral agreements as a step towards realizing this important goal.

Both sides acknowledged the necessity of forging regular cooperation and exchange of views between political, military and security officials of the two countries to combat threats such as terrorism, smuggling of narcotics, human trafficking, hostage-taking, money-laundering and abduction.

It was also agreed that the 10th Round of the Special Security Committee of the two Ministries of Interior will be held in Islamabad in June this year to discuss these matters in detail. Pakistani side welcomed the initiation of the process for release of a number of Pakistani prisoners by the Government of Iran, and for making arrangements for their expeditious repatriation.

Both sides agreed to hold the 2nd Round of High Border Commission in Islamabad next month to review the measures required for the earliest opening of new crossing points at Gabd-Reemdan and Mand-Pishin, besides opening of new border markets.

They highlighted the necessity of extending cooperation in energy sector including export of electricity from Iran to Pakistan.

Pakistan and Iran have reaffirmed their commitment to peace and security in the entire region.

The understanding came at a meeting between Iranian President Hassan Rouhani and Prime Minister Imran Khan during talks in Tehran today[Monday].

Both sides also agreed to set up a Joint Rapid Reaction Force to guard the common borders.

Later addressing a joint news conference, Prime Minister Imran Khan said the two countries have decided to enhance cooperation in counter-terrorism to ensure that no country's land is used against each other.

Referring to the recent terrorist incident in Balochistan, which claimed lives of fourteen security personnel, the Prime Minister said incidents of terrorism affect relations between the two countries.

He said the entire political leadership in Pakistan has pledged that no militant group will be allowed to operate from Pakistan and the soil of Pakistan will not be permitted to be used against any other country.

The Prime Minister said the two sides also decided to cooperate for helping in peaceful settlement of the Afghan conflict.

Referring to the Indian atrocities in occupied Kashmir, the Prime Minister said there is no military solution to the lingering dispute but it can only be resolved through political settlement.

Imran Khan said the settlement of the dispute will help take forward the entire subcontinent and improve economic and trade linkages in the region.

No third country can harm the brotherly and close relations between the two countries: President Rouhani

Addressing the news conference, Iranian President Hasan Rouhani said unfortunately we witnessed some tensions in the border areas in the recent past where the terrorists perpetrated their nefarious acts.

The Iranian President said we also emphasized that no third country can harm the brotherly and close relations between the two countries.

Hassan Rouhani said both the countries have also agreed to bolster their trade and economic relations and we have agreed to set up a barter committee so that goods and other items could be exchanged.

The Iranian President said we are also interested in establishing links between Gwadar and Chahbhar ports in order to strengthen our commerce relations.

He said his country is ready to meet the oil and gas requirements of Pakistan. He said we have already taken the measures to construct the gas pipeline to Pakistani border.

Hassan Rouhani said Iran is also ready to increase the exports of electricity to Pakistan.

Pakistan and Iran also signed a memorandum of understanding for cooperation in the health sector.

Prime Minister Imran Khan has emphasized the need to increase Pak-Iran bilateral trade for the mutual benefit of both brotherly countries. During the meeting, they discussed the ways to improve bilateral relations.

The Supreme leader of Iran conveyed his deep regard and attachment with the brotherly people of Pakistan and prayed for the success of the Pakistani nation.

In this regard, he gave the example of ASEAN countries and China that enjoy a very high level of trade with neighbours.

The Prime Minister regretted that Iran, Pakistan and Afghanistan are very close neighbors but have very low trade volume with each other. He said Iran with 80 million people and Pakistan with 210 million people are large economies and have a huge trade potential.

Imran Khan expressed the wish that Pakistan and Iran should start developing their bilateral trade on immediate basis. He said only 10 per cent rice coming from Pakistan to Iran comes directly.

He said it is high time that we work on increasing trade despite sanctions on Iran and other challenges.

The two leaders held one on one meeting and discussed bilateral relations and regional situation.

He laid floral wreath at the tomb and offered Fateha.

On arrival at Sa'adabad Palace on Monday, a formal welcome ceremony was held in honor of Prime Minister Imran Khan.

National anthems of both the countries were played on the occasion.

Prime Minister Imran Khan arrived in Tehran on his two-day official visit to Iran to hold talks with Iranian leadership on bilateral and regional issues.

Earlier, during his stay in Mashhad, the Prime Minister visited the shrine of Imam Reza (AS), and offered Dua and Nawafil.

Mashhad: Prime Minister visited the shrine of Imam Reza (AS), and offered Dua and Nawafil 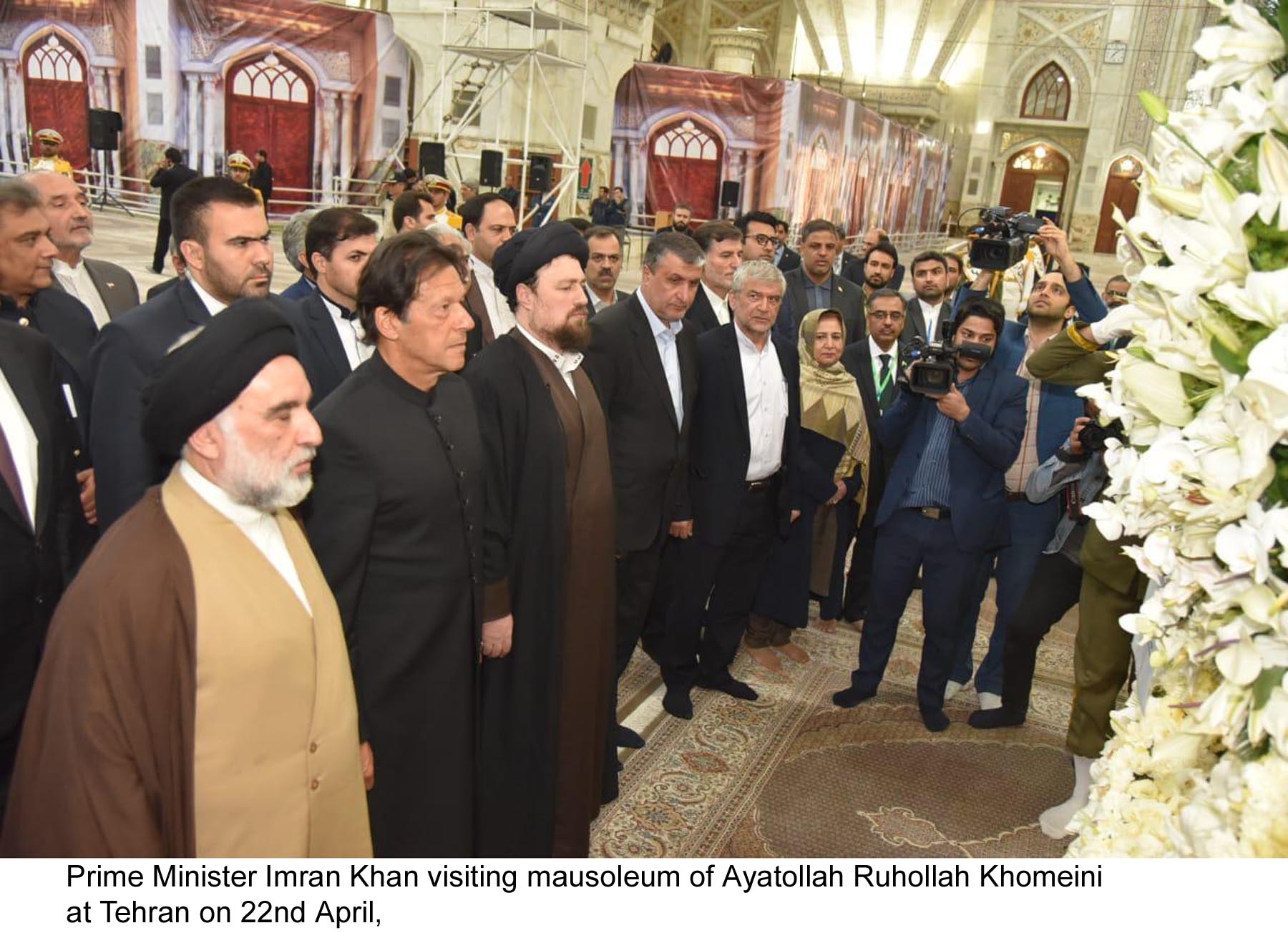