President Dr Arif Alvi says Pakistan's proactive approach to prepare itself for the technology-focused fourth industrial revolution would lead it towards becoming an economically strong nation.

In an interview, he said a brilliant future lies ahead for Pakistan if it timely jumps on the technological bandwagon.

The President said he strongly believes that there is no limit to Pakistan's economic growth after getting a stronghold in domains of cyber security, artificial intelligence and computing. He said Pakistan is also capable of meeting the challenges of cyber defence.

Dr Arif Alvi expressed optimism that Pakistan, in the next decade, would turn into a geo-economic hub and become one of the strongest countries in the world in terms of economic stability.

About Indian Illegally Occupied Jammu and Kashmir, the President regretted that the United Nations still not conformed to its promised resolutions on Kashmir and the world has ignored India's so-called peaceful nuclear capability besides its recent episodes of illegal uranium sale. 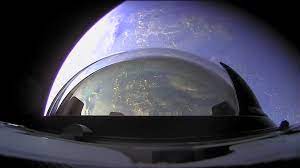