Dr. A. Z. Hilali (IR Expert): It is a welcoming development that the European Union is taking notice of the worst human rights violations in IIOJ&K. India must realize that it can no more ignore global calls to stop the worst atrocities in IIOJ&K. India’s brutal security forces have been targeting Kashmiri people for the last seven decades. Indian troops are using pellet guns to blind the Kashmiri youth and suppressing indigenous freedom movement. It is high time that Islamabad intensifies its lobbying efforts to help get resolve the Kashmir dispute.

Abdullah Gul (IR Expert): It is a diplomatic victory for Pakistan that the world has started taking notice of Indian atrocities and the worst human rights violations in IIOJ&K. I congratulate the government of Pakistan, international media, Kashmiri Diaspora and Sikh community living abroad for taking a strong stance on Kashmir issue. The Indian position has weakened on the international front. India has emerged as violator of human rights and a state which openly sponsors terrorism. India has failed to malign Pakistan through fifth generation warfare. The international media has effectively exposed the worst Indian human rights violations in IIOJ&K. There are some sane vices within India taking jibe at Modi's inhuman policies. India is led by a murderer who is labeled as the butcher of Gujarat. The Modi regime is losing its control fast over IIOJ&K. Modi's India has become a failed state.

Brig. (Retd.) Said Nazir (Defense Analyst): We have witnessed rapid shifts in the political situation of Afghanistan in recent months. The Kabul government is habitual of playing blame games to hide its failures in governing the country. Pakistan has played a proactive role to facilitate the Afghan peace process. The world has acknowledged Islamabad's efforts for regional peace. It is appreciable that global powers are making collective efforts for Afghan peace. The hasty withdrawal of the US troops would risk the security situation in Afghanistan. It is responsibility of the United States to ensure political and security stability in Afghanistan before complete withdrawal. Taliban are not in the favor of civil war.

Lt. Gen. (Retd.) Raza Muhammad Khan (Defense Analyst): Pakistan has continued to emphasize that there is no military solution to Afghan conflict and a political process is the only way forward. Towards this end, Islamabad has been engaged in serious efforts to facilitate an Afghan-led, Afghan-owned peace process. Prime Minister Imran Khan, on several occasions, has reiterated his calls for reduction in violence in Afghanistan. Afghan government should take proactive measures to fulfill its responsibility for internal security, law and order and protection of Afghan lives. Pakistan stands ready to extend all possible cooperation to Afghanistan in the areas of security and effective border management. Islamabad desires and continues to support a peaceful, stable, united, independent, democratic, sovereign and prosperous Afghanistan. It is important that Afghans seize this historic opportunity for reaching an inclusive, broad-based and comprehensive political settlement to bring an end to the decades-long internal conflict in Afghanistan. The irresponsible statements from the Kabul government would escalate the tension in the region. The United Nations Security Council must intervene and make an interim government to handle the situation after withdrawal of international troops from Afghanistan. Peace in Afghanistan is shared responsibility of int'l community 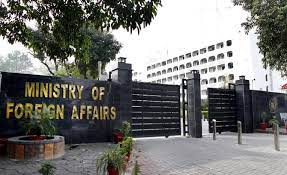