Kashmir Solidarity Day was observed on Friday to express whole hearted support of Pakistani nation to the just struggle of Kashmiri people for their inalienable right to self-determination under the UN resolutions.

The day was marked to expose worst ever oppression being perpetrated by Indian occupation forces against Kashmiris in Indian Illegally Occupied Jammu and Kashmir (IIOJ&K).

One minute silence was observed at 10.00 am to pay homage to the martyrs of the liberation struggle of occupied Kashmir. 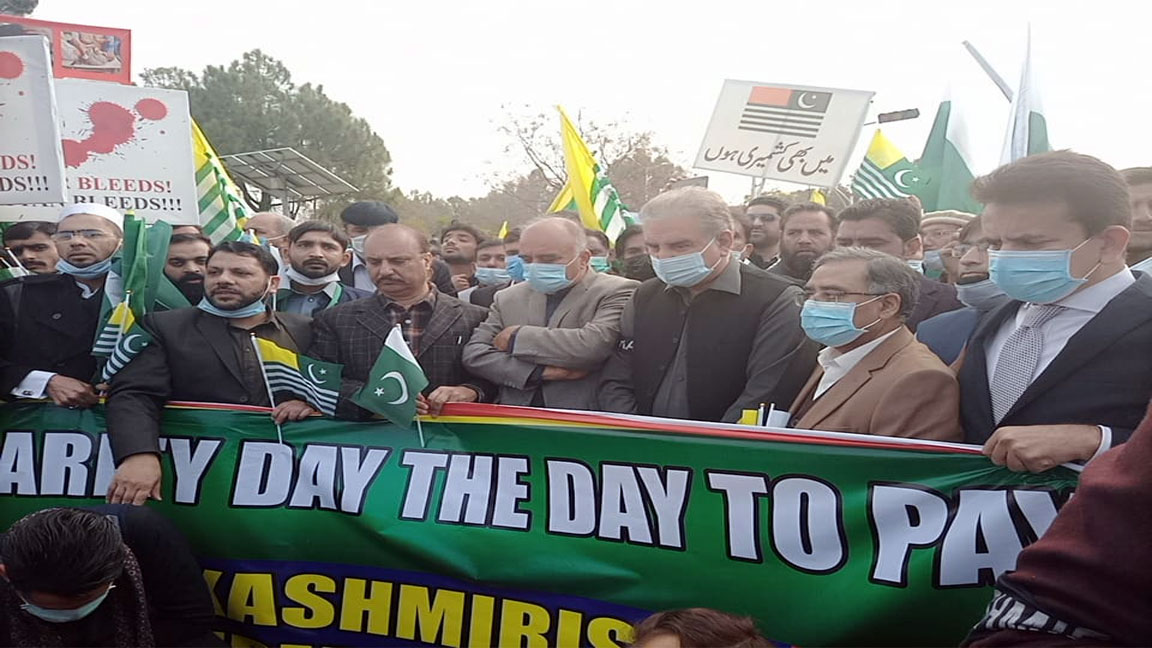 On the occasion, Prime Minister Imran Khan addressed a public gathering at Kotli in Azad Jammu and Kashmir.

Human chains were formed at Kohala and other important points linking Pakistan and Azad Kashmir.

In Punjab, Kashmir Solidarity Day was observed in a befitting manner, like other parts of the country, to show full support to Kashmiri people in their struggle for right to self-determination.

The day dawned with prayers for innocent Kashmiri people after Fajr prayers at mosques.

Many government departments, political parties besides social, academic and non-governmental organizations organized Kashmir rallies and gatherings at Divisional, District and Tehsil level. Participants of these rallies were carrying banners and placards inscribed with slogans in support of Kashmiri people and against the Indian atrocities in the occupied territory.

In Lahore, the main official ceremony of this special day was held at the Governor's House to show united support for Kashmiri people.

Speaking on the occasion, Punjab Governor Chaudhry Muhammad Sarwar said that Prime Minister Imran Khan is successfully acting as an Ambassador of Kashmiri people in their struggle for right to self determination.

In a message on Kashmir day, he said that Pakistani nation fully supports Kashmiris in their struggle for freedom.

Special Assistant to Chief Minister Punjab on Information, Dr. Firdous Ashiq Awan said the the Narendra Modi Government in India has unleashed a reign of terror in Indian Illegally Occupied Jammu and Kashmir and all Pakistanis stand united with their Kashmiri brethren.

Addressing a ceremony in connection with Kashmir Solidarity Day in Lahore, she said that the innocent Kashmiris are victim of Indian state terrorism.

She said that India has murdered hundreds and thousands of innocent Kashmiris including women and children.

The Special Assistant said the international community must support innocent Kashmiris and raise voice against the Indian aggression.

She said Pakistan will continue to extend moral, political and diplomatic support to the Kashmiris till the independence of the IIOJ&K.

He said that nobody can snatch that right from Kashmiri people. He said that the PTI Government will expose atrocities being committed by Indian forces in Occupied Kashmir.

Kashmir solidarity day was also observed in Multan and Dera Ghazi Khan Divisions as elsewhere in the country with national enthusiasm and determination to show firm support to Kashmiri brothers till their independence from illegal Indian occupation.

The rallies and seminars were held in different cities and villages of the both divisions.

In Multan, the main rally was taken out from Raza Hall, Multan which was led by Punjab Minister for Energy, Dr. Akhtar Malik.

Addressing the participants of the rally, Dr Akhtar Malik said that we will continue our moral support with the innocent Kashmiris till their freedom.

He said that Prime Minister Imran Khan has raised Kashmir issue at all International fora and this issue is being considered at serious note now.

In both the divisions, the participants of the rallies were holding flags and banners and chanting slogans against the Modi regime.

Kashmir solidarity day was also observed in Sindh likes elsewhere in the country today to express Pakistani nation's support to the just struggle of Kashmiri people for their right to determination under UN resolutions.

Various political, religious, social, governmental and non-governmental organizations chalked out programmes in regard with the day in which speakers threw light on the just struggle of Kashmiri people for their right to self-determination and also exposed the oppression being perpetrated by Indian occupation forces against the people of Indian Illegally occupied Jammu & Kashmir.

A ceremony in regard with the day was held in in Karachi which was addressed by the Governor of Sindh Imran Ismail, whereas a rally was also taken out from Peoples Chowrangi in the city which was led by Sindh Chief minister Syed Murad Ali Shah.

Meanwhile Governor of Sindh Imran Ismail, in his message on the occasion, expressed whole hearted support to the Kashmiri people by Pakistani nation and said that Pakistani nation will always stand by people of Kashmir in every test of time.

Chief Minister of Khyber Pakhtunkhwa Mahmood Khan assured full support of the provincial government to the Kashmiri brethren in their struggle for freedom.

Addressing a walk regarding Kashmir solidarity day, he urged the international community to take notice and raise its voice against Indian brutalities on innocent civilians in the Indian illegally occupied Jammu and Kashmir.

He appealed to the global powers to play their role in acquiring their right to self-determination.

Khyber Pakhtunkhwa Governor Shah Farman participated in a walk in Islamabad along with Foreign Minister Shah Mahmood Qureshi to express solidarity with Kashmiris.

Meanwhile, a similar rally was taken out by Rescue 1122.

Participants of the walk were holding flags of Pakistan and Azad Jammu and Kashmir in their hands. They were chanting slogans of 'Kashmir Bany Ga Pakistan'.

Like elsewhere in the country, “Kashmir Solidarity Day” was observed all over Balochistan to express solidarity with the Kashmiri brethren.

In this connection, Balochistan Awami Party took out a big Kashmir Rally in Sanjavi tehsil of District Ziarat while Provincial Minister Noor Muhammad Dumer and party leaders of BAP addressed a public gathering to express solidarity with Kashmir brethren.

Similarly, various functions were also held in almost all districts of the province under the auspices of political parties and social and cultural organizations in which speakers fully supported Kashmiri people in  their struggle for the right to self-determination under the UN resolutions.

In Gilgit-Baltistan, the main protest rally was started from Benazir Chowk which passing through Raja bazar converted into a public gathering in Etihad Chowk in the city.

Addressing the ceremony, Senior Minister Ubaidullah Baig condemning the Modi Government said that Kashmir has been converted into a big prison where continued genocide of Kashmiries has been going on since long.

Kashmir Solidarity Day" was observed by Pakistani missions and the Pakistani community abroad.

To express solidarity and reaffirm Pakistan's unconditional support to the Kashmiris in their struggle for right to self-determination, various events were organized in Colombo, Shanghai, and Hong Kong.

Speakers, on the occasion, stressed upon the peaceful solution of the Kashmir issue through meaningful dialogue and highlighted the significance of interfaith harmony as well as peaceful co-existence of all.

Pakistan's Acting High Commissioner in Colombo reiterated the resolve of the government and the people of Pakistan that they will always stand shoulder-to-shoulder with their Kashmiri brothers and sisters in their hour of need. He said, Indian Illegally Occupied Jammu Kashmir has been under sheer brutal violence of Indian troops for more than seven decades and it is high time the world, especially the United Nations must take notice of these human rights violations. He said no illegal and unilateral Indian actions can alter the status of Jammu and Kashmir as a disputed territory. The High Commissioner said, no amount of Indian sophistry can change the fact that Jammu and Kashmir is a "disputed" territory and is recognized as such by the international community.

Ambassador of Pakistan to the UAE Afzaal Mahmood, while addressing the gathering, reaffirmed Pakistan's moral, diplomatic and political support to the legitimate struggle of the Kashmiri people for their right of self-determination.

The Ambassador said people in the Indian Illegally Occupied Kashmir are a part of Pakistani nation and Pakistanis will always stand shoulder-to-shoulder with them.