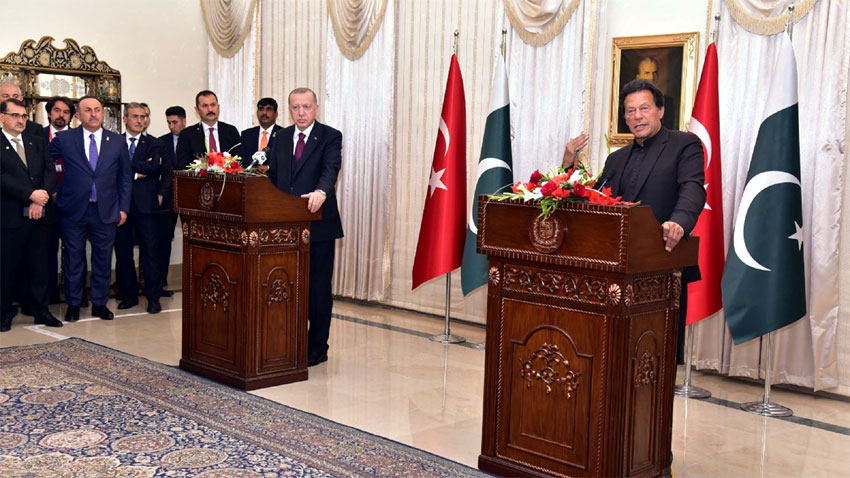 A number of Memoranda of Understandings and agreements were signed between Pakistan and Turkey in Islamabad today (Friday) to enhance cooperation in different fields. 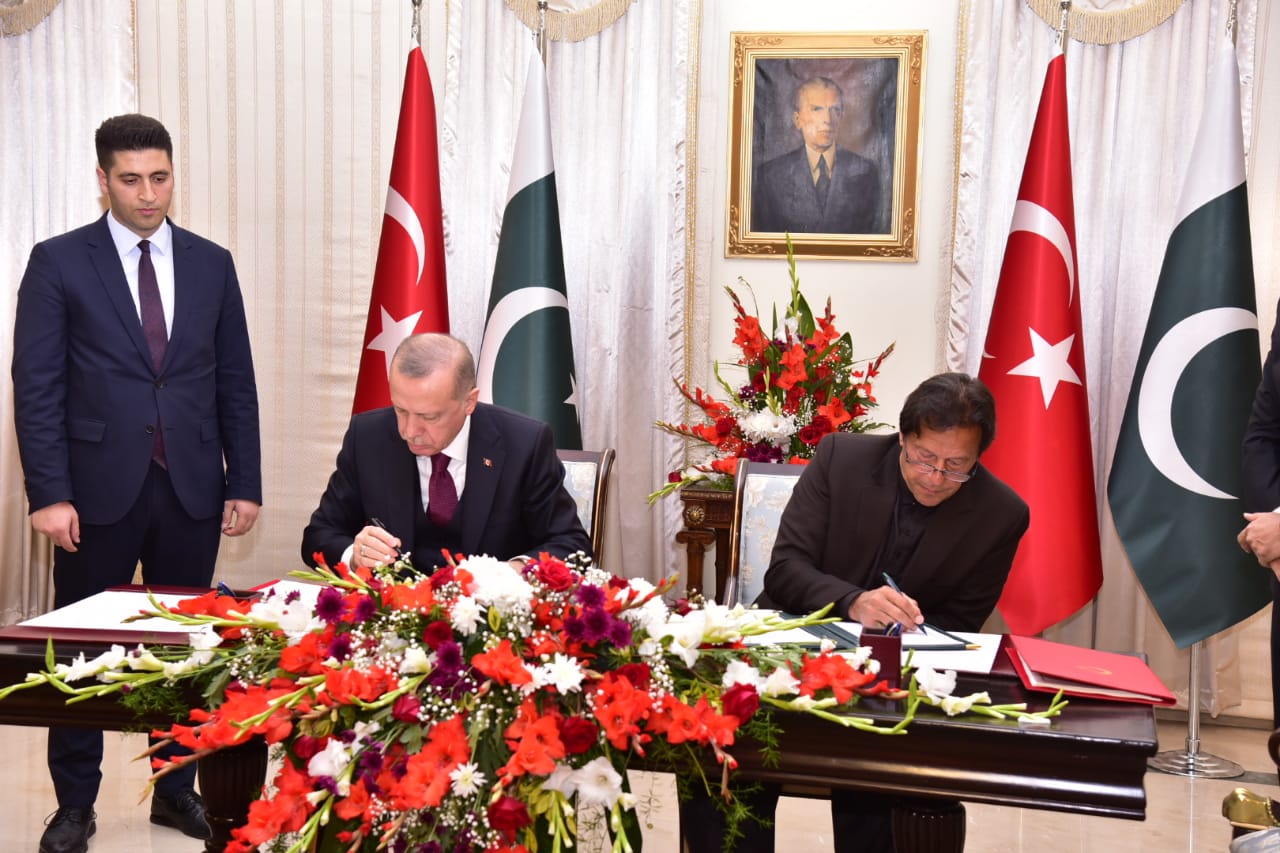 A cooperation agreement was signed between TRT Turkey and Pakistan Broadcasting Corporation. DG PBC Samina Waqar signed and exchanged the document with her Turkish counterpart. 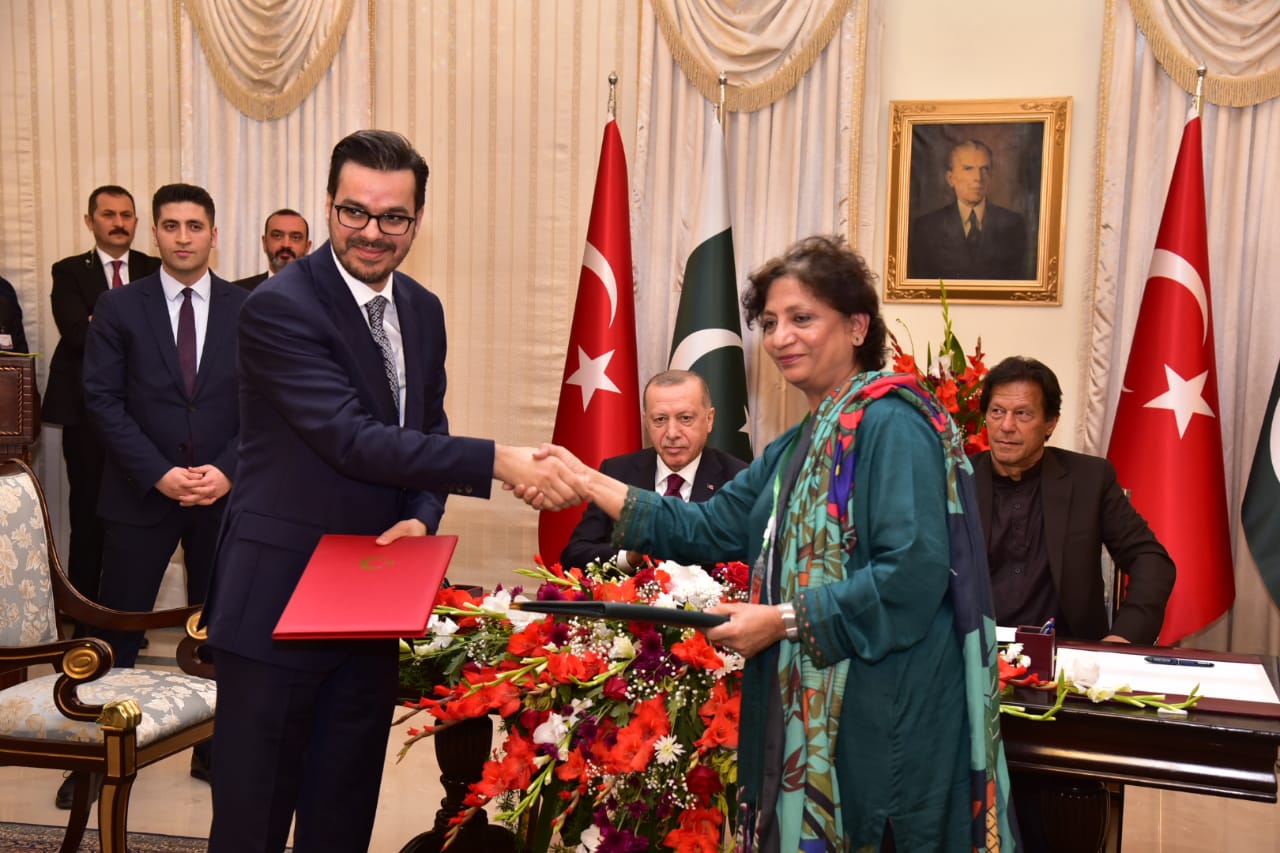 Later, addressing the joint news conference, Turkish President Recep Tayyip Erdogan said Turkey is in deep solidarity with people of Kashmir who have been suffering repression and bad consequences for a very long time.

He said Turkey is in favor of finding a peaceful solution to Kashmir issue by dialogue between India and Pakistan on the basis of UN resolutions and according to aspirations of Kashmiri people.

He appreciated steps taken by Pakistan against terrorism and efforts of the country on regional stability.

Recep Tayyip Erdogan said our cooperation in military and defence are part of our dynamic relationship.

The Turkish President said strategic economic framework is the roadmap of what we should do in order to deepen our economic cooperation.

He said we are ready to provide all out support in transportation, energy, tourism, health care, law enforcement, and health that will help economic and social development of Pakistan.

In his address, Prime Minister Imran Khan thanked Turkish President on raising his strong voice against repression of Kashmiris. He said around eight million Kashmiris are virtually under siege for the last six months, with their leaders arrested and communication blocked.

The Prime Minister said the MoU signed on Strategic Economic Cooperation will open new vistas of enhanced trade relations between Pakistan and Turkey.

He said the cooperation agreement signed between TRT and PBC and PTV will help provide an opportunity to work together against narrative of Islamophobia. He said we want to utilize the Turkish film industry against Islamophobia.

Prime Minister Imran Khan said Pakistan wants to learn from the experiences of rapid development made by Turkey in diverse sectors, including tourism and construction.

He said the government wants to develop construction sector on the pattern on Turkey.

He was seen off at the Nur Khan airbase by Minister for Economic Affairs Hammad Azhar and other senior officials.