The human rights group Amnesty International has said the Indian government is widely misusing a law allowing for detention without trial in Occupied Kashmir.

Head of Amnesty International India Aakar Patel said the Public Safety Act is  a “lawless law” under which the authorities hold children, old people and the disabled.

He said this act is contributing to inflaming tensions between the state authorities and local populace and must be immediately repealed.

According to the statement, the Public Safety Act circumvents the criminal justice system in Kashmir to undermine accountability, transparency and respect for human rights.

It said, the text of the PSA violates several of India’s obligations under international human rights law, including respecting detainees’ fair trial rights.

The Amnesty added that examining several government and legal documents of the detainees, it found a pattern of abuse by the authorities including detaining children, passing PSA orders on vague and general grounds, ignoring the limited safeguards under the Act, subjecting individuals to revolving-door detentions and using the PSA to prevent release on bail and undermine the criminal justice system.

Speakers at a welcome get-together in Brussels while opposing the Indian government’s de-limitation plan said that the move is aimed at abrogating Kashmir-specific Articles 370 and 35-A to change the demographic composition of occupied Jammu and Kashmir.

The event was organized by MEP Professor Klaus Buchner in honour of the newly elected parliamentarians in the European Parliament in association with the Organization of Kashmir Coalition. 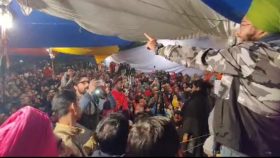