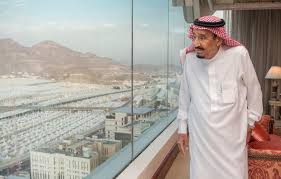 The Custodian of the two holy mosques King Salman Bin Abdulaziz visited Mina to supervise the services provided during the Haj pilgrimage.

According to Saudi Press Agency, King Salman directed to relevant government and private sector bodies to ensure the services in order to meet the needs of the pilgrims and allow them to complete their Haj rituals with ease, tranquility and safety. Departure of Pakistani pilgrims continuing after conclusion of Hajj Around 30,000 Pakistani pilgrims arrive in Madinah to pay homage to Holy Prophet (PBUH) Repatriation of pilgrims continuing from Saudi Arabia to Pakistan Repatriation of Pakistani pilgrims is starting from today