Brad Pitt and Laura Dern scooped the supporting acting awards for their roles in Once Upon A Time in Hollywood and Marriage Story respectively.

The World War One epic had been the favourite to win best picture, but its awards all came in the technical categories.

The film is a vicious social satire about two families from different classes in Seoul - one who live in poverty in a semi-basement, and another rich family residing in a large home.

It has now managed what no other subtitled film has done in the 92-year history of the Academy Awards and won best picture.

"I feel like I'll wake up to find it's all a dream. It all feels very surreal," Bong said.

Producer Kwak Sin-ae, who collected the trophy, said: "I'm speechless. We never imagined this to happen. I feel like a very opportune moment in history is happening right now."

There were boos when organisers tried to cut short the best picture acceptance speech by turning the stage lights off - leading the lights to be turned back on, allowing the celebrations to continue. 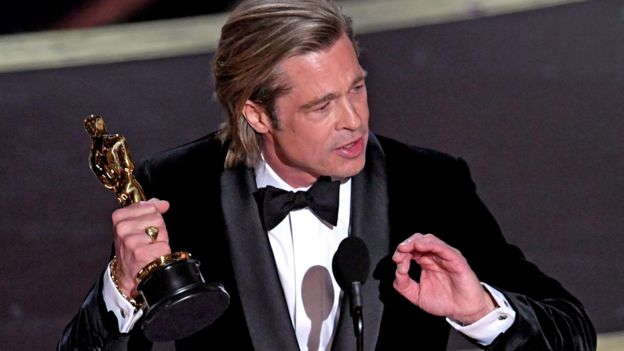 Brad Pitt won the first acting Oscar of his career - picking up the best supporting actor trophy for his role in Quentin Tarantino's film.

He was the first winner of the night, and immediately used his speech to attack the way the impeachment proceedings against US President Donald Trump were handled. 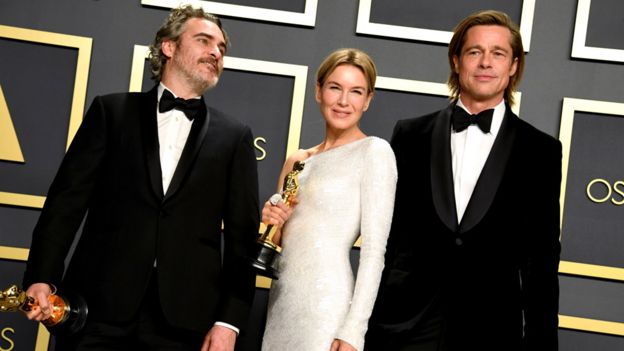 Phoenix, who won best actor for his remarkable performance in the origin story about Batman's nemesis, also used the podium to send a heartfelt message about the state of the world, saying actors have the power to give a "voice for the voiceless".

After telling the audience to stop clapping him as he took to the stage - "Don't do that" - he managed to cover topics from animal rights and the environment to racism and sexism.